Would you like to switch to the accessible version of this site?

Don't need the accessible version of this site?

What is This New Thing? 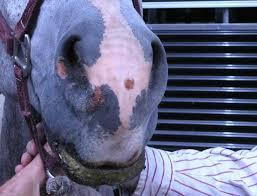 Many clients have called or asked about the new disease going around. Well it is not new, it's just new this year. Vesicular Stomatitis virus is typically diagnosed in late summer or early fall in the southwest and has been known to spread into other states. The last outbreak in Nebraska was in 2015.  Vesicular Stomatitis is a viral disease that primarily affects horses and cattle and occasionally swine, sheep, goats, llamas, and alpacas. In rare occasions humans become infected with the disease after handling infected animals.
Vesicular Stomatitis in itself does not generally cause animals to die or become severely sick but its outward symptoms mimic a different disease called foot and mouth disease, a foreign animal disease of cloven-hoofed animals that was eradicated from the United States in 1929. If foot and mouth disease was reintroduced into the United States there would be huge negative economic impact to the livestock industry.  Click here to learn more.

Thank you Dr. Black for the thorough pre-purchase exam of the newest member of our family! As always you answered all of our questions and the staff is fantastic! We look forward to many happy years with our animals and appreciate your care and expertise!!

Find us on the map